The Year of Vanished Fish

You're a bit lost right now, a bit bewildered to find your foundations absent and sureties you had taken for granted now unsteady things. There is, abruptly, a fog of uncertainty in your head, obfuscating your present and making a smeared water-colour painting of the future you're trying to aim at. You've never coped well with uncertainty, being a touch too gifted at taking all potential hypotheses into consideration when presented with any decision, but you're doing okay for now. Ish. Okay-ish.

That's all we can hope for, really. The uncertainty is you. Or rather, you are uncertain about all things including yourself. Especially yourself. You do not trust your own judgment, nor your capacity for logic, nor your ability to function. Lately, you've found yourself a startlingly unpredictable creature. Mood swings that have no trigger you can identify, nor any overarching plot to trace too. Violent bouts of crying that blindside you like a brick and disappear just as abruptly, leaving you nothing short of perplexed and confused, because while that violence ambushes you, you don't feel it.

What are you? You are not known to yourself. Not right now. For perhaps the first time. Your mind is now terra incognita.

In the interests of getting to know you, me, I, us, them, let's try a little exercise. I know it will be tough, because we've already tried this a couple of times with the result being Ctrl+A, Delete. I know your heart isn't in it, because mine sure as hell isn't.

But for the you, me, her, them that come back from the future to read this, some balance is required. This blog has become an unhappy place. You, I, we're only recording the misery. That's no fault of yours, I know. Processing the turbulence is more important than maintaining balance for the readers. But let's just try, okay? For you, me, us, them. For later.

Without further ado; things that made 2010 worth living.

And without further ado; I have deleted the list created.

Partly because it was forced. There is no capacity within me to be grateful for the privileges I've enjoyed the year passed. I acknowledge them, but right now I cannot feel them, and so to speak of them would be an exercise in lying to myself.

Also, I am battered and bruised and flinching. There is no capacity within me to trust the randomness of the world and its enduring capacity for capriciousness. If I were to announce the small wonders I hold close, then the acknowledgment would drive the world to then poison those wonders. Let them stay precious for now. Let them stay private. Let them be only mine.

Last year everything clicked into place. It was as though you had finally reached the age you have always been, and fit your skin and personality for the first time. You're a school of fish, and last year the fish swum out of their chaotic lack of coordination and began to move as one.

Here and now, some of the fish are missing. Not eaten, not fled, simply disappeared. The remaining fish do not roil in confusion, although they are confused. They are lost. They don't know where they are going, and so they are not going anywhere.

You're a school of fish, full of holes and still in the water.

Sharks will find you if you stay like this.

2011 is going to wear me down. The decisions I've made will involve a great deal of fenangaling, and I expect to melt down often and with significant fallout. Even from out here the plans scare the shit out of me, but, scary things are worth doing. Remember that.

I wish I could go sailing into this year hollering and wild-eyed with some misguided sense of glory, delirious anticipation of the mistakes and messes I am to make, impatient for my triumphs and awards, and full of hunger for all that is unknown ahead of me. I wish I still had that strength, that willful heedlessness to all that might rend and scar. I wish I still knew that I would conquer the world.

It's come to three letters, two nested, each responding to the last, because by all that is infuriating and exasperating, THERE IS TOO MANY ME. We are an arrhythmic school of fish, and every damn fish has something to say. We, Planet Tessa, a fucking hivemind of one.

We have something to say to ourselves.

Maybe I'm not a school of fish, maybe I'm a migration of Golden Rays, or Blue Fin Tuna, or Wilderbeast. Maybe parts of me are meant to split off. Maybe my identity is meant to diverge and separate and be a fractured thing that will, later, come together again as something new.

It's 12.34am, and my ears are ringing with the memory of music. Music = mountains. There's mountains in me now, as intangible as music. This duality of being both immense and macroscopic in their extremes simultaneously is rare these days, it doesn't sweep through and out my head as often as it used to. But it is here now, and so I will ride it and say this.

You will not escape this year resolutionless. I had thought to let you off the hook this time, as the pressure of promises won't help you right now, and there are so many things you want to address, the size of the list alone will choke you.

Now, now, now you'll be the spread lace of the Frilled-Neck Lizard, the raised quills of the Crested Porcupine, and the rampant fluffage of the White-faced Scops Owl. You're not dangerous, but you can pretend to be. 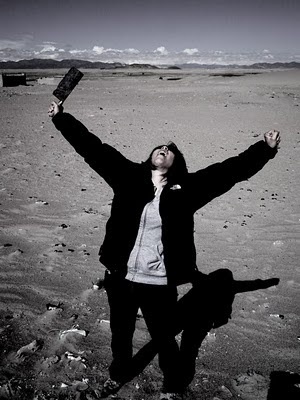 What do puffer fish do when they are frightened?

They make themselves look a damn sight sillier, but the point is made. In taking damage, they defeat their adversaries.

You are not strong, little fish, but you will be brave.

Labels: check them ace recap skillz, homesick, posterity can suck on this, steaming pile of horseshit, there are no convenient falling pianos, there are no white knights, there is only time, This Is Tessadom