and now we're falling off the launch pad

When I woke the migraine had downgraded itself to merely being a razor-edged headache, and that's, pfft, easy peasy, so I went to work.

Where the migraine proceeded to regroup and launch a second assault, having brought in the reinforcements of nausea and mild vertigo. Fuck that horseshit. I'm home now, am snorting my way through a sloppy lunch so the pills aren't sitting on an empty stomach, and I'm about to make a complete blistered baboon's arse out of my sleeping pattern and go to bed. Again. Where I will feel sorry for myself some more.

I would like to say that this is all run of the mill stuff, the harbingers of imminent period arrival, but, haha, I've been caught out.

The Vandermeers are off traipsing about Europe (as rockstar authors and editors do, right?) and in doing so discovered my Secret Glowing Penguin Army in Prague. 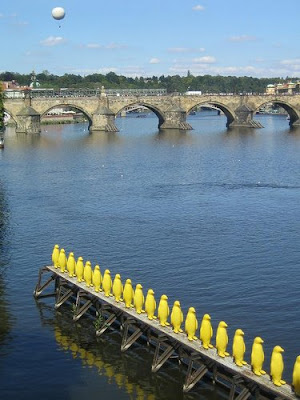 In the future, armies are manufactured on request (you've all seen Clone Wars), and this is the future. My marvellous Dr Who Villainesque penguins, you will note, are not walking the plank, but invading from the water. They're beamed down from the mothership (cleverly disguised as a weather balloon, as you can see), and are currently completing infiltration exercises in Prague. 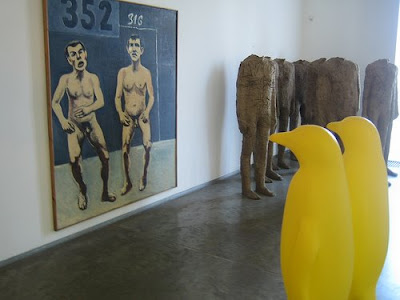 Which mostly involves visiting museums and pretending to be art critics. They're doing a great job.

However, to oversee the logistics of such an operation I must project my mind-control super-vibes all the way to Europe, and dude, that's on the other side of the planet. Do you know how much concentration that takes? It takes a lot. Hence I have this blinding headache, and some rogue green penguins.

The bunnies, though, are nothing to do with me.

It's times like these I really feel for Zeus. His headache was so bad he had someone cleave his head in with a hammer, and lo! out popped Athena. I doubt any BAMF goddesses are lurking in my frontal lobe, but I do fully sympathise with the sentiment, and harbour a great desire to stick a screwdriver in my temple.

However, doing so will probably result in more multi-coloured penguins, and this army ain't no disco.
Posted by Tessa at 2:42 am

Labels: and zeus is all I'M ON THE PHONE BIATCH, poor me, WAR PENGUIN