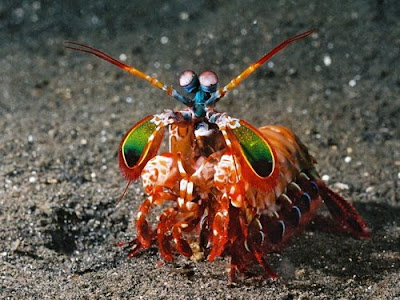 I was reading this, and was having a gay old time with it, but alas, could not finish the article. For some reason the cut feature is crashing both Safari and Seamonkey. Bummer. Stalked barnacles sound gnarly.

"What is so cool about barnacles anyways? They are the John Holmes of the invertebrate kingdom with penis lengths exceeding 8 times their body length...Imagine your self glued head first to a rock, kicking your legs out your front door to draw in a current, hopefully with food - that is the barnacle."

Being so thwarted, I clicked through to this article about mantis shrimp and how they see, and, like, WHOA. They possess the kewlest eyes in the animal kingdom, they see the difference when light is turning clockwise and anti-clockwise. I didn't even know light turned, my eyes are so dumb.

They also fuck your shit up.

"Mantis shrimps are no stranger to world records. They are famous for their powerful forearms, which can throw the fastest punch on the planet. The arm can accelerate through water at up to 10,000 times the force of gravity, creating a pressure wave that boils the water in front of it, and eventually hits its prey with the force of a rifle bullet."

Like, WHOA. The wiki article linked up there goes into further detail, stating that they're so fast, the energy from their punches creates light and heat, and the wake of their punches has enough pressure to act as a second punch. Holy smokes. Well, with a face like that, you can't really blame them. They break aquarium glass too. I want one. To go with my flamboyant cuttlefish.

There's a video at the bottom of that article showing a mantis shrimp wailing on a crab, but here's a different one.

It's also wailing on a crab, but this video has some great shots of how they move. There's something delightfully centipede-y about them. At the very end, it snatches the crab and drags it off into its lair in a very Alien-esque manner. Fucking OARSUM.

Mantis shrimp. Not a mantis. Not a shrimp.

Also, more unknown beasties found in the Antarctic depths, including these: 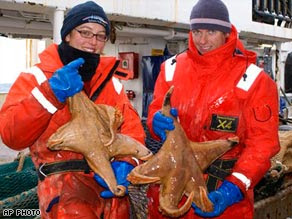 Nooooow, am I wrong in remembering that Lovecraft's At The Mountains Of Madness was set in Antarctica? And the beasties were starfishy? ZOMG. THEY ARE BABY ELDER THINGS. WE HAVE STOLEN THEIR BEBEES. WE ARE SO BONED. FHTAGN.

(I always thought the Elder Things were pretty silly looking, myself.)

Phew. I'm rather flustered now. That's far too much radical awesomitude for one day.
Posted by Tessa at 8:32 am