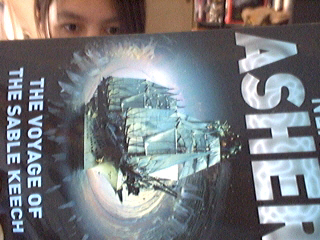 Because the last book I'd read was unbelievably awesome and still had its claws in me, I picked this book up next specifically because it was totally different.

Which means it sucked.

I know Asher gets a lot of love, and I'm sure somewhere out there are works of his that deserve it, but this isn't it. If you're first time to Asher's universe, like I was, stay away from this one. It's a bit of an in-crowd thing.

The story is about....hell, I don't know. A bunch of stuff happens, and I was waiting for a point to be made, but there wasn't one. Just stuff. A lot of characters feature, all of whom appear to have length backgrounds and significant history in other books, which I haven't read and don't know about, and the right information wasn't given at the right time so in the end I didn't care either, and it feels like all these characters are brought together because Asher likes them, and can't leave them alone, and they must all have last hurrahs. "Here, your beloved friends return again, isn't that awesome?" From my point of view, no. Not to mention that all the characters seemed to possess the same voice, with the same amout of smartarsery which got annoying after a while.

I mean, was there a point to the whole giant whelk thing? Giant whelks are cool, but unless they serve a purpose other than being big and squishing things for the convenience of the plot, I don't want them.

There wasn't even a something about the dead not being dead and la di da.

So much telling, not much showing.

In a weird way, I saw this book as a warning to myself, as all the flaws I see in it, I'm guilty of. Plenty of cool shit and cool stuff for no point whatsoever. If I write like that, with that many pages involved, stop me, please.

Very glad I read this after my giant crab story was picked up. There's even a character called Thirteen. I know, I know!

Verdict: If you like Asher's stuff and want more, here's more. If you don't know Asher's stuff, go start at the beginning. If you want. No pressure.
Posted by Tessa at 4:40 am