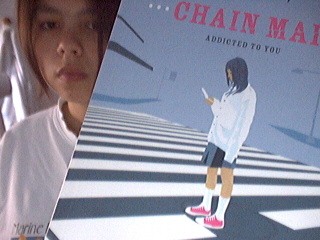 After the last book, I had a hissy fit, and went and read all the Harry Potter books, which you don't need to hear about. Then I had another hissy fit, got mad at books at general, and didn't read anything for a month. When I finally got over that, the memory of lugging around those Harry Potter books was still raw (those lumps are heavy), and so I picked this up because a) it was cheap, b) a really light read, and c) REALLY REALLY REALLY SMALL.

On my own, I represent a new trend that publishers should consider - I don't want more book for my money. I want you to drop the prices of books and make them not nearly as heavy as they are. My wrists can't take this crap.

The story is very straight foward; four high school girls, all unknown to each other, get involved in a little message board online role-playing, and of course the fictional world and the real world start to reflect each other, and weird scary stuff starts to happen, and oooh, who knows how it will end?

I do! Because it's very straight forward. So straight forward, I'd assumed the writer would have known this and made an attempt to obscure the ending or provide a new and interesting twist, but they didn't. Oh well.

Despite the predictability, this is a decent read. The fact that there's a translator and an english adaptor indicates to me that they didn't leave it all to the translator to actually write the story, and gave that task to someone with the know how. It reads smoothly, if simply. The role-play sections themselves possess distinct voices, which most real online RP fails at.

Ultimately, it comes down to the fact that everyone wants friends. And will be weird, creepy, and stalkery to get some.