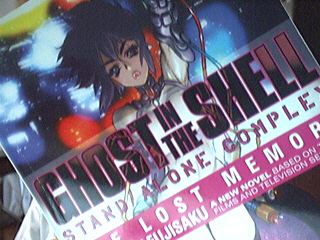 Recently finished watching the for SAC series, and it worked for me. I know tie ins generally suck, but eh. My inner rabid fangirl fails to give a rats.

According to the bio, the writer is one of the episode writers from the anime series, so he knows his material. He's not writing fanfiction because what he writes is canon. Yep. This turns out to be the books undoing, as it reads not just like an episode, but like a tv script. There's the big print at the beginning (a laborous description of the physical setting), character placement (exactly what it says), and then dialogue. And monologue. All those voice overs. It would work just fine on a screen, but in dead tree format, it reads like a dead, dead, dead fish.

It particularly suffers from telling, given that information cannot be shown as easily as on a screen, and even though it's only 210 really small double spaced pages, it took a long time for me to read it. Bleeeeah.

Respect the mediums you work in, and the ones you don't, please.