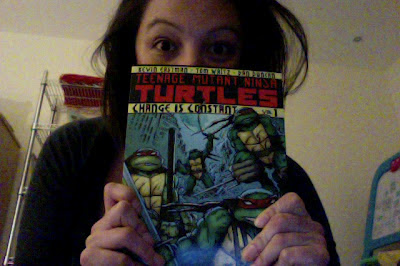 NO ONE TOLD ME THERE WAS A NEW COMIC SERIES OUT, OR THAT IT HAD BEEN OUT LONG ENOUGH FOR THE FIRST COLLECTED EDITION TO BE RELEASED.

It is a reboot of the original series, and I have to say, it is ace. The origins of the turtles and Splinter has knit together several antagonists from various, shall we call them, parallel universes that the many many licensed franchises the turtles have evolved in over the years. A good blend of both the original Mirage comic and the 80s cartoon, even featuring "General Krang". Curious to see if Krang remains a gooby brain (I never did like the story arc given to the gooby brain Krang/Shredder character in the new TMNT cartoon series). Art work by Dan Duncan is gorgeous, once again blending the multitude of styles in which the turtles have been depicted in the past. A good balance for the kids new to turtledom, and the kids grew up but never let it go.

(Funnily enough, I was only this week missing my TMNT comics and DVDs. We all have our comfort stories. Thank you, universe. Don't think I don't appreciate it.)
Posted by Tessa at 9:57 pm

Labels: comics, this post is brought to you by the letters O M and G, TMNT, verdict