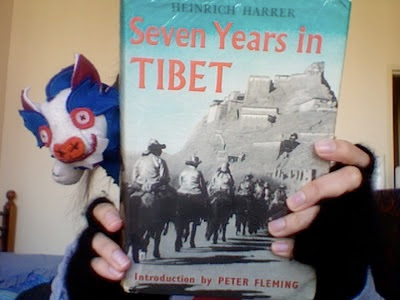 In comparison, this book was exactly what I wanted it to be.

(Well. Apart from the introduction by Peter Fleming, which was so full of British arrogance I nearly tore the pages out.)

Another treasure I discovered in City Basement books, this is from the sixth print run, only a year after its initial publication. It is 56 years old, and has that old book smell about it. There's a gorgeous map in the front detailing the long route Harrer and his companion Aufschnaiter took from the internment camp they escaped at Dehra Dun in India to Lhasa in Tibet, and years later, his flight from Lhasa back to India with the invasion of Red China. At regular intervals are selected photographs that Harrer took during his stay in Tibet, which have changed since last I looked at them. Rather, my eyes have changed.

I believe this story is fairly well-known; with the outbreak of the Second World War the mountain climbing party that Harrer and Aufschnaiter were part of was detained in India and imprisoned for what was supposed to be the duration of the war. They weren't really okay with that, escaped (after a number of unsuccessful attempts), and hemmed in by both Nepal and India, neither of which offered any real refuge, pushed on to Tibet, the most neutral country in the world, with long term goals of maybe finding employment in China and making it through to Japan.

After the various accounts I've read of navigating Tibet and my own experience, I have to wonder if anyone is ever prepared for Tibet.

It is a tale quite simply and wonderfully told. Harrer falls well and truly in love with Tibet and its people, and while he does not attempt to sell this to the reader, that love saturates every sentence and paragraph. He cannot help but colour the narrative with his affection for the place, and so the reader, this reader, cannot help but fall in love as well.

This is the Tibet that people want to visit. I can't describe it as anything other than that. It's the mythical, mystical, magical holy city that exists in the minds of wondering outsiders. It's a land packed full of miracles, everywhere a miracle, and a people who are as warm, kind and welcoming as we hope them to be. Harrer had a singular opportunity to study and immerse himself in the country from an outsider's point of view, and this book is but a glimmer of the insights he gained into the character of the nation during his time there.

It's enchanting, enthralling and fascinating. Like Tintin in Tibet it's enough to plant that desire to go and insert a root system so deep that desire will never be uprooted.

And then, Red China "liberates" Tibet, and it ends.

This book was what I wanted, and at the same time, what I needed. A reminder that the Tibet that exists in this book and that I yearn to explore no longer exists. Every day that passes with Tibet beneath Chinese occupation the chances of that Tibet ever resurrecting diminish.

By the time you, I, reached that point in the book, in history, I was well in love. Harrer's heart broke with the invasion and so did mine. The terrible things that happen in war were only hinted at; China is well advanced in military finesse. Tibet is a nation that truly embraces peace, all aspects of it. The resistance, the Tibetan army, such as it was...

It's impossible to write about a book that within my mind is not the shape of a book.

Verdict: When is a book not a book? When it is this book.
Posted by Tessa at 3:20 am