A Mountain in Tibet - Charles Allen 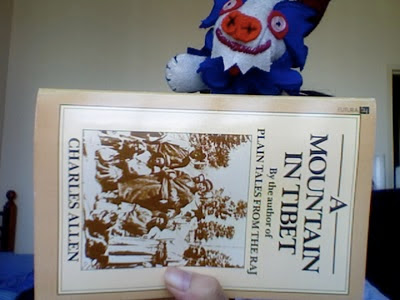 Lonely Planet Tibet contained a list of recommended reading, with this book as being for those specifically interested in Mt Kailash. Unfortunately, this books is out of print. Fortunately, I have special luck when it comes to travel-related literature and City Basement Books (which is where I stumbled across Journey to the World's End), as I located this pristine copy amid a stack of books on the carpet for a mere $6. Unfortunately again, City Basement Books is no more.

Upon starting this book I was a touch put off; it wasn't quite what I wanted. The focus was not upon Tibet, and although the various narratives related within the pages take place within Tibet's borders, the focus is not really within Tibet either.

The book concerns itself with the surveying of the Kailash region, specifically in regards to finding the sources of such rives as the Ganges and the Brahmaputra, as well as the Indus and Sutlej, and the majority of such surveying attempts stem from the British Raj in India.

After what felt like a very dry history lesson regarding Kailash's cultural, religious and geographical significance, the book goes on to detail each foray into the region which results in some of the white areas in the map of Tibet to be unveiled as each occurs in history. A lot of time is spent skirmishing around the foothills of the Himalayas at the mercy of the hill tribes. An equal amount of time is spent looking at the politics of the Raj and the wider world (Tibet played a significant role as a buffer between British India and Soviet Russia during the years of the Great Game) as well as the smaller politics and scraps between academics and scholars regarding who discovered what first and the validity of any claims made by any explorer returning from that most mysterious unknown land.

Once reconciled to the fact the book wasn't what I wanted it to be, I had an alright time with it. Although I'm certainly it wasn't intended to be a comedy, the absurdity surrounding some of the expeditions mounted by the Raj had me laughing out loud. I became particularly enamored of the Pundits, the surveyor-spies trained by the Survey of India. Cartography at its most badhorse.

The final chapters deal with one Sven Hedin, a Swedish explorer who was much maligned by the Royal Geographic Society and, in turn, not presented by Allen without bias.

Hedin became the highlight of the book. In both his failures and successes was a...I don't know that there is a single word that will serve the purpose. At once reckless and determined. His expeditions were frightening things which demonstrate either ignorance or deliberate heedlessness, his first expedition across the Taklamakan being a perfect example. He was presented as a conflicted man, doing great things but demanding recognition equal to his deeds, his own character sabotaging the good will of those who would provide such recognition (the fact that he was a Nazi supporter didn't help either) and thus poisoning his own view of his achievements.

He was a flawed man with a magnificent ego. Yeah. I empathise.

It is interesting to see how history treats the people that come to shape it. Later, in my further reading regarding Tibet, the accounts in which he feature painted a very different picture of the man.

At any rate, I read this several months ago, and details have blurred. Although it wasn't what I wanted, it did give me a fantastic lesson in Tibetan geography which I used not only around Kailash but the whole country.

Verdict: Dry, not without academic bias, but yes, very good for those interested in the geography around Kailash.
Posted by Tessa at 2:09 am