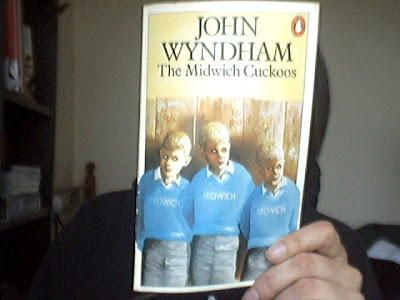 When did I read this? Ages ago. February. During that insane heatwave. When I was staying with Mum and Dad, convalescing after the excavation of my wisdom teeth. I remember lying on the floor boards in the hallway, in the vague hope I'd be in a position to take advantage of any breeze coming through the front door. There was no such thing. The power went out, because every single privileged bastard with airconditioning had it maxed out and overloaded the power grid. We had no airconditioning. We had desk fans and wet towels. Then we only had wet towels.

So I read to escape the heat and my square face.

This being a 52 year old classic, I don't feel there's anything I have to say about it that will be new or interesting. It has earned the title of classic, it is a masterful work of suspense and body horror, even though the phrase didn't exist at the time. The village of Midwich is unreachable for a couple of nights due to mysterious forces, and then just...comes back. Everyone wakes up not realising anything untoward had happened. The effects only reveal themselves later, when every woman in the village is pregnant.

This is dealt with in largely practical terms - in that stalwart British style - which allows the underlying tension and horror to build in a wonderfully subtle and insidious fashion. An unplanned pregnancy is scary enough, imagine if you were in fact a virgin, or with menopause well in the past. Imagine you didn't want children. Imagine something was growing inside you, and you didn't know what it was, and there was nothing you could do about it? I imagined all that very well, thank you very much, and was terrified. Dude, pregnancy is frightening enough when it's planned and you want it.

And then, everyone gave birth, and aside from some peculiarities of appearance, everything was fine.

Until, of course, it wasn't. As the children develop, a new sort of terror takes shape, no less powerful. Part Stockholm Syndrome, part necessarily illusion for the sake of your own sanity, neither of which alters the circumstances, about which nothing can be done.

Unfortunately, this incredible tension and momentum the story gains is deflated when the children finally reveal themselves, and the characters and reader become aware of their true nature. Then, as with horror movies for example, it stops being about the waiting, and becomes just a chase - and there's only ever one ending for a chase. The question of ethics does make the decisions made particularly nasty, but no longer unexpected.

What struck me most, however, was not just that no one would publish this story now, but that no one would even write it. It's lean, it disregards the passage of time with barely a nod, it does not flesh out characters more than is utterly necessary. It's from another time and another place. It works in unfamiliar ways, and makes unexpected assumptions. No one would write it.

That can only be to our detriment.
Posted by Tessa at 7:21 am