what i mean when i say "i've had my insult for the night and i'm leaving."

I don't think I'm that easy to insult and/or offend, not on personal level. I could be wrong. I might just be fortunate in that the majority of people I interact with are not the sort of people who go around saying insulting and/or offensive things with a particularly personal bent. It is very easy to irritate me, frustrate and vex and annoy me, but offend?

I'm pretty sure I'm not often offended, because this weekend I found myself offended and it was a fairly novel experience.

So, for the record, when you say, "I hate you. I fucking hate you. Fuck you, and fuck your family. Yep. Fuck your whole family," you should know that you have completely and utterly failed at the friendly joking funny shittalk.

My initial reaction was to slap the person who said this. I managed to pull it back to being a playful slap. Just. I can't say I've ever really hit someone in my life, so I'm not entirely proud of this reaction, partly because such violence is petty and pointless, but mostly because I did in fact pull back and did not break his fucking nose.

This was followed by, "you're a bad person-" (which, admittedly, I get told a lot) "-you're evil. You're the root of all the evil and bad and wrong in the world. You're the cause of all genocide. All the genocide in the world is because of you." Which, after the "fuck your family," line, was icing on the cake.

This isn't the most offensive thing this person has said to me either.

Why's he still in my life?

I've finished my angry drunk fuming and had a good amount of hangover surly ranting. I'm spending no more time on the matter. It is noted here, for future reference.

And on the subject of shit-

Food that tastes better than it looks. 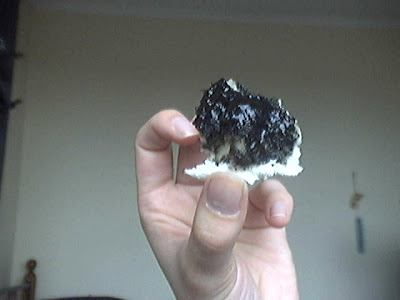 Looks like I dipped white bread in tar.
Tastes like mmmmmm, hot black sesame bao. Awesome stuff.
Posted by Tessa at 4:27 am

Labels: crankitude, feast, i dare you to ask me why i'm a misanthropic introverted hermit crab, This Is Tessadom