Because I can't help but make a LIAR out of myself.

I was rummaging, and found this photo. I took it when I was tooling around the States a couple of years back, it's on the Skyline Trail at Paradise, on the slopes of Mt Rainier in Washington. It was August at the time, and not much further up I was walking through snow and looking down on glaciers and generally making alarmed and amazed squawking noises. 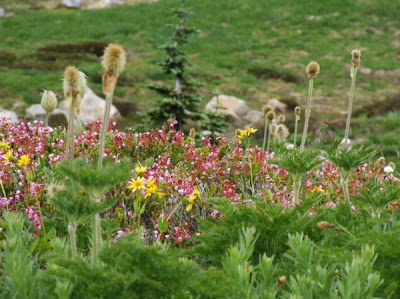 Do you SEE? It's a flower-filled meadow!

I DIDN'T BELIEVE THEY EXISTED.

It's entirely possible that Australia possesses, somewhere, at some point in the seaons, flower-filled meadows, but I haven't seen them, and they wouldn't be nearly this green, and there'd be snakes and nasty biting things hiding in the flowers, and there would not be BAMBI dozing in the middle of it, as there was in this case. And the damn flower-filled meadows were everywhere. Ev. Er. Ee. Where. I felt rather like I'd fallen into a Disney movie, and that I should be singing and frolicking. In the flowers. That were everywhere.

I found it a shame that the others with me, Europeans and Kiwis for whom the alpine environment was not at all a new thing, didn't see the marvel before them the same way.

Even though I have that memory, and I took this photo, I find that my belief in flower-filled meadows has diminished. They're too pretty for the suspension of my disbelief.
Posted by Tessa at 9:52 am