LOOK! I WROTE A THING!

Volume 12, Issue 3 of the Review of Australian Fiction includes 'By the Moon's Good Grace', an incredibly raw and hard story, the ending of which left me feeling heartfull and nourished, and 'The Fate of All Wens' by


Ahahahaha, I actually froze there. It's the first time I've typed [title] by [author] for this story. 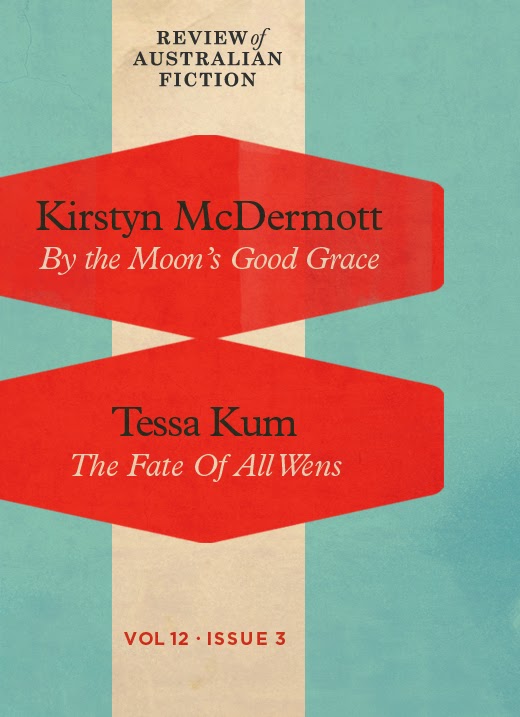 So much gratitude and appreciation for Kirstyn McDermott for inviting me to co-contribute, and her story is worth the price alone. An incredibly raw, hard piece with a happy ending that left me feeling heartfull and nourished.

Always credit and thanks to the Deb Kalin for reading my weirdly-shaped drafts and being a useful voice, not only in terms of critique but for keeping this writer calm. Super kowtow in awe before Megan Bartlet, who literally must have lasers for eyes, that's how sharp her proofread was. If you'd like to secure her services, she may be contacted at megan dot bartelt at gmail dot com.

Anyone who has put up with me wailing about my health all these years will know what this means to me. Couldn't have done it without J, who sees the worst of me and still enables and supports my loud mouth with love and a laugh. I mean it. I literally could not have done it. You my thing.

Literature lovers: this story explores the questions of free will in a spiritual world, in which the vying responsibilities to the self, the family and the community play out against a snow-crusted world at the dawn of civilisation.

That's the important stuff, all that up there. Everything about to follow is the excited-puppy I WROTE A STORY that every writer does even if they pretend they don't. Incredibly self-indulgent and most likely containing far too many exclamation points.

I am very excited!

I mean it! Lots, and lots, and LOTS of waffle.

Because I'm afraid my brain will forget the story of this story, and I don't want to lose it entirely.

I don't remember where the original image came from. Usually I can point at something in the outside world which, as ambiguously related as it might be, has tripped into an idea. I saw a young woman carrying her friend - dead, frozen - through the snow, in order to nail her to a tree, to keep her safe. Honestly no idea where it came from, although I do suspect the subconscious may have been paying a great deal of homage to Deb Kalin's 'The Cherry Crow Children of Haverny Wood', which I would command you all to go and read at once! If it were yet published. It's coming. I'll be very loud about it when it does, because holy shit.

Anyway, I had no story to stick that image in, I didn't have any preplanned world to drop it into, it took me months to even discover Wen's name, and I think I have about four aborted attempts at writing it. All very different.

Things I learned (because you learn things with the writing of every story, even if you're learning the same lesson again):

If you don't know the ending, you, Tessa, really have no idea how to write forward.

You really do need to finish your worldbuilding before attempting to write as well. Otherwise you'll have to revise so much you might as well throw the draft out and start over. Which is what happened. Several times.

Your brain is too foggy to proofread your own work.

Remember how you got so far into your novel by realising you only needed to write the important pivotal parts and ignoring the rest for filling in later? You really need to do this all the time. Seriously. Write the scenes out of order. Drink tea without milk. Go wild.

It's really hard to write about the snow when living in a sub-tropical climate by a wonderful sand beach.

The 'junbu' is a fictional sibling of yartsa gunbu, a product of one of those fungi that works via mind control and cadaver automation. It is fascinating reading, both for the simple biological run down of the melding of insect and fungus, and the economic impact and strain demand for yartsa gunbu is having. This article in National Geographic goes into more depth, and has incredible photos.

Wen became Wens when I thought her name was in fact a label, with all orphans simply named thus. When the Wens became more, I do not know. Where that idea came from I also don't know, as it doesn't smell like something I'd normally come up with. I've a horrible suspicion I've done that accidental idea-lifting thing. Bloody hell.

Well. The Wens are pretty awesome in their own right anyway.

Normally there's so much time between submitting and publishing that this writer can fall out of love with the story, and thus approach it more as a reader. Not this time. I was in Melbourne, at a happy-bursting wedding, and taking some time out from the socialities to noodle in my journal, and perhaps simply being in an unfamiliar place shook some blocks into place, because the story just seemed to coalesce before me. One moment it was a mess, the next, BAM! Cohesion. I love that feeling, when suddenly you know you really do have something to work with, and your idea isn't total tosh.

And while I was sitting there, watching my friends dance like shit yeah, an email from Kirstyn arrived asking me if I was interested in co-contributing to RoAF oh but you only have a month if you want to do this.

It was just too perfect, you know. The story had just fallen into place so I was high on that energy, and to be given a deadline with a most excellent carrot at the end... I did try to talk myself out of it. There was no way of knowing if I'd be able to deliver in that time frame, either a finished product or one that was of a suitable standard. I haven't had a story published for, I don't remember. When Year's Best Australian picked up Acception for  a reprint, I think. I haven't finished a story for even longer. There are dear friends I have known for years who have never had to put up with me publishing a story before. Because. Well. There are five million bazillion jillion posts in the archives talking about the psychological damage inflicted by RSI and a chronic illness, and the shift in brain chemistry brought about by medication does creativity no favours. I wrenched the identity of writer from my core. I didn't think I'd write again. The need to survive the very real and physical chance that my health was never going to improve was a higher priority than anything that looked like a writing career. If any of you wondered how I dealt with the damage to my career I did with my last angry post, there's your answer. I'd divested myself of interest in a career years ago. My goals are much more humble.

Getting to jump up and down like this is one of those goals. This is enough.

So of course I said yes!

And then dove face first into drafting and flailing and becoming frustrated that my brain will not hold all the words I want access to at the same time. And I yelled at my story on twitter when it was being uncooperative, and I drove J nuts blabbering about bears and taiga flora, and it was so exciting to feel the story grow into its pages, and then I actually had it all written, and all the scenes moved into the correct order, and I wrote THE END, and holy shit I'd written a story.

I WROTE A STORY!

I love it. It was only written in September, I'm still madly infatuated with it. It was not hard to write, because there was kindness in the story. There are moments I love deeply, and instances in which I can see all that lost time was not entirely wasted.

That said, there's some right clunkers in it. That's what happens when you stop writing for years on end. Your writing gears get rusty and you get flakes of rust in your story, messing things up. It isn't as polished as I'd like, and I'm still not entirely sure I have Wen's voice right. Nevermind. It is still enough to say I WROTE A STORY.

AND NOW IT IS PUBLISHED.

I can do this. I can still do this. There's no rain that could spoil the triumph in my heart.