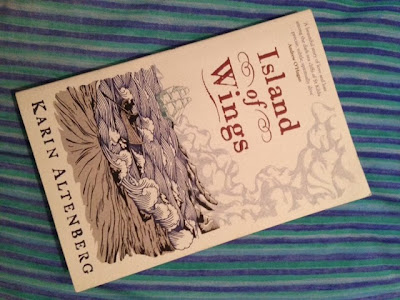 buy :: site
This book came to me at the Ullapool Book Festival, during which the B&B I was working at was packed full to the brim of authors, editors and publishers. The café was full of book talk. The upstairs lounge was left in an immense disarray every night, as it appears genre writers and literary writers are much the same in their ability to drink and debacle when left unsupervised in large groups.

Karin Altenberg was one of the guests, and I attended an interview with her based solely on the subject of her latest book: St Kilda. The timing was serendipitious. I'd just been there, and still had the ghosts of gannets in the corner of my eye.

It's a beautifully written book. I deliberately let it sit a while, so my memories of the island were not so close, but Altenberg herself has visited the island, and lived for a while on a Swedish island, and there is some intangible but instantly recognisable truth in her prose which captures the essence of island life. That even if you have no contact with the sea, being neither fisher, hunter, sailor nor swimmer, it rules your world with an indifference and benevolence that is at once comforting and horrifying.

This is the story of Elizabeth MacKenzie, wife of the minister Neil MacKenzie, who took it upon himself to save the poor souls of St Kilda. She arrives on this island pregnant with her first child and discovering that no English is spoken, only Gaelic, is completely isolated from everything she has known.

Altenberg spoke of the extensive research she had done prior to writing this book, as there is plenty of historical documentation and correspondence regarding the minister's time on the island. I recall quite strongly that, in all the accounts and letters and records and diaries, she found only two mentions of Elizabeth MacKenzie. One saying she served tea, the other a passing comment on her appearance.

What develops in the pages is a rich narrative full of that which is unspoken, of being trapped in vast spaces and finding peace and strength in being the stranger. It is at once heart-wrenching, both Elizabeth's tale and the circumstances of the people of St Kilda, and uplifting. The island, unforgiving as it is, is a singularly stunning place. A perfect combination of "oh heavens no I wouldn't want to live as the St Kildans did or be so chokingly isolated like Lizzie," and "Perfect wilderness, I want to walk those slopes again." There is no moderate space within St Kilda, and that is how the lives of those who live on her are shaped.

We'll never know who Elizabeth MacKenzie was as a person, never know a thought that passed through her in the long dark winters or the idyllic summers. She's two short sentences in all of history.

It could be that the Elizabeth that Altenberg has summoned to the page is completely inaccurate, and we'll never know. But what Altenberg succeeds in doing is writing of this overlooked woman with respect, warmth, and an understanding that, when reading of her plight and all her trials, is a necessary emolliate for a reader stricken by empathy.

I love everything about this story, even as I despair the historical events which bracket it.