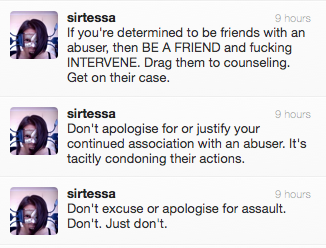 This is in my opinion a fairly low bar, and someone called me out on it. 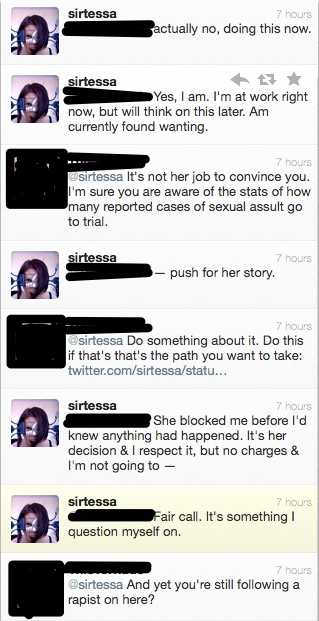 An incident between other parties, one I don't know well and the other being a casual amicable acquaintance. Such is the nature of online dynamics. One of those instances where, regardless of what happened, I don't feel I know either well enough to "take sides".

It isn't for me to get involved. I'm not that invested. It's none of my business.

And that is how this culture of apologists perpetuates. We don't take responsibility for another person's actions, and use that to deflect attention from not taking consequential responsibility for our own. My own. This small thing, following someone on twitter, has actually been niggling at me since being given the low down. Because. Because. Because I was doing exactly what I was preaching against. But. But. But. I mean. It's nothing to do with me. I mean. Until being called out for it, and spending a minute staring out the window at work after getting back from lunch, and realising what was stopping me from nixing this association was fear of reprisal. I'll upset someone, and there may be lash back from his friends, and maybe people will then cut me out, and-

Fear of people not liking me. I may never leave this fear behind.

Which is irrelevant next to the trauma the victims of violence have experienced, and keep experiencing. It was easy for me to make that cut when it was one of my dearest friends crying in the police station. That's personal. It's not so easy to rock the boat when you're removed by a degree, when it's nothing to do with you. But there is no "being neutral". Letting an abuser into your life without consequence is taking a side, and if you, if I, am not prepared to take on that person and change them, then walk away.

So I've unfollowed that person on twitter. Such a small thing, and it's something that took me most of a year to do. I've hung out with this guy. He's a nice guy. A good guy. I don't want to believe he's a rapist. I gave him the benefit of the doubt because I didn't know the whole story, the facts of the incident are in dispute. In doing so, I automatically put the victim in the position of being a presumed liar.

Some of you reading this will know who I am writing of, and not agree with me on it. You may choose to cut me off. That's okay. I'll be upset, but I do understand. That will be the consequence of my actions. I've been saying these things over, and over, and over. I've raised my voice enough; now it's time for me to actually do.

After making this decision, and acting on it, there was this: 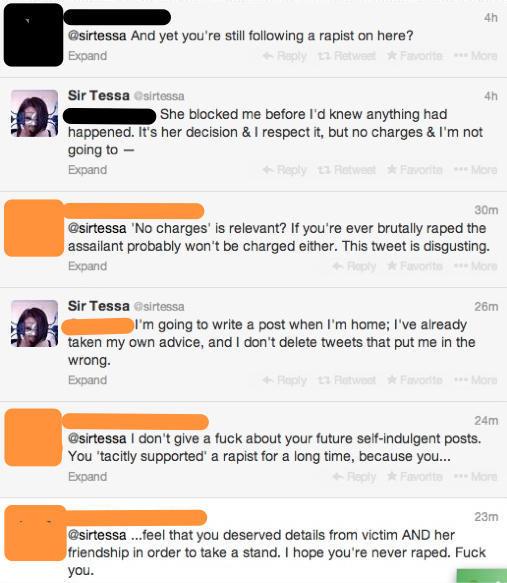 From a different party. I'm just going to do a quick dissection as this is a 101 fuck up. Actually I don't really need to add anything; Orange has done a fine job of of pointing out the basic tenements of victim blaming which I fell on. There's an excellent post over on Captain Awkward, here:

Some of the boldest advice in the piece is to make sure people know who the rapists & suspected rapists are and openly take sides against them. It’s the advice that is probably going to get the most pushback from MRA- types obsessed with “false accusations.” Watch for lots of appeals to fairness and privacy and “innocent until proven guilty.” Hell, I fell more than halfway into this trap myself when answering this question. Not cool, me.
In a court of law, if you are the judge or the jury, a defendant must be presumed innocent until proven guilty beyond a reasonable doubt. That’s it. No one else is held to that standard. To even investigate the crime & make charges, the cops and DA have made some presumptions that so and so is guilty. As Thomas says:

Some people will say that it’s unfair to do that, to simply take the survivor’s word, to say things about people without due process.  Well, due process is for the government, to limit their power to lock people up or take their property.  You don’t owe people due process when you decide whether to be friends with them.  You don’t have to have a hearing and invite them to bring a lawyer to decide whether to invite them to a party.  And let’s be honest, most of us repeat things that one person we know did to another person we know based on nothing more than that one participant told us and we believe them.  We do it all the time, it’s part of social interaction.
So if you want to do something, take the label, plant it on the missing stair in your social circle, and make it stick.

The last section, called It Can’t All Be On The Survivors, builds on this responsibility.  Thomas calls out the total pointlessness and complete shittiness of the idea of neutrality and trying to remain friends with both abusers and their victims, another topic that has come up here  more than once.

It Can’t All Be On The Survivors
I’ve seen the following two things happen:
(1) someone gets sexually assaulted, whether raped or violated in another way, and people say to the survivor, “you have to do something!  If you don’t do something, who will protect the next victim?”
(2) someone gets sexually assaulted, whether raped or violated in another way, and the survivor yells and shouts for people to deal with it, and the people who are friendly with both the survivor and the violator shrug their shoulders and try to stay “neutral.”
What these two things have in common is that in each case, the people around the situation place all the responsibility on the person who most needs help and can least be expected to go it alone.
…Confronting people is emotionally taxing, and it often irreparably ends the friendship.  In fact, about something as serious as rape, it invariably irreparably alters the friendship.  If you believe that your friend raped your other friend, and you say, “hey, you raped my friend,” then the old friendship is gone forever as soon as the words leave your mouth.  What remains is either enmity, or a relationship of holding someone accountable, just as tough and taxing as staying friends with a substance abuser who is trying to get clean and sober.  That’s not easy.  That’s a lot of work, and most people are not up for it.
The option most people choose, because it gets them out of that, is to choose to not make up their minds about what happened…
…Just think about that.  ”Hey, you’re still friends with Boris.  But X said Boris raped her.”  ”Well yeah, but I don’t know what to believe.”  ”Well, but you know what Y said, and Y’s account was a lot like X’s.”  ”Yeah, but I don’t know what to believe.”  ”But Z said Boris violated consent, too, and that’s three people …” “Well, I’ve been friends with Boris a long time, so I kind of don’t know what to think …”  (Trust me when I tell you, folks, I’m not making that up.)

Those two excepts cleanly summaries exactly what I did in 140 characters. The nuances of intention and further background are irrelevant. Guilty of what I speak out against and pretty disappointed in myself.

Since doing this, I've had several individuals approach me to talk about the implications behind the decision, because while this decision affects that one guy, it's not about him. There's always more to be said on this subject – false accusations do happen, people are destroyed by them – but the last few hours have been a bit full on, and I no longer have the emotional or intellectual capacity to do words/thoughts good. It doesn't matter which way social bias lies, there will always be people who take advantage of and abuse the system. However, here, now, I choose to give the victim the benefit of the doubt.

Every instance of abuse is complicated and subjective. It's nothing but grey areas, but for those of us not involved, we must accept that there is no neutrality. It's all grey areas, but we must choose in black and white. Maintaining the status quo is easy. Trying to be the change you want isn't.

I will continue to fuck up as I try to do what is good and right. I hope I learn.
Posted by Tessa at 10:45 am