Buckingham Palace is, well, yes. It is yet another stately building in a city full of stately buildings. Historians and architects alike may despair my plebeian ignorance and lack of appreciation, but apart from watching the guards stomp back and forth in an attempt not to lose their toes to frostbite, there really wasn't much to behold. The Queen wasn't in so it wasn't though we could pop inside for a cuppa either.

Out the front is, however, the Victoria Memorial, which is a very large ornate and ostentatious affair with statues and 'gifts' from various members of the Commonwealth which look surprisingly similar to communist propaganda monuments from the Soviet era. But with lions.

Presiding over all this is an angel of "unclear entitlement" (according to wikipedia) which could be both Peace and Victory. Wiki also claims that the statue is bronze, not the goldiest gold that ever golded, as I assumed. 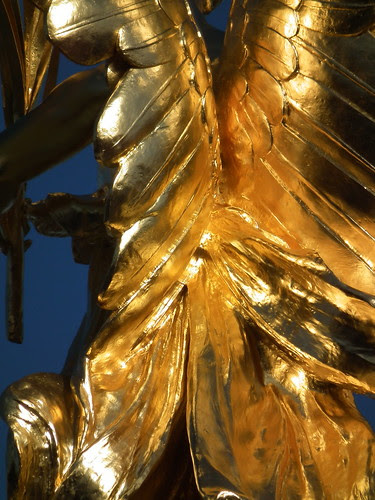 The Original Bling, a photo by sirtessa on Flickr.

I mean, seriously, look at it. That's bloody gold, that is. No photo manipulation either. The winter sun did its thing.

Anyway, gold or bronze aside, you will agree that it is very, very shiny. And free of bird poop.

London is obsessed with bird poop. I've never seen so many spikes placed upon surfaces to deter birds from perching. Spikes everywhere. Everywhere! On railings and fences and window sills and ledges and gutters and street lights and statues and signs and EV.ER.EE.WHERE.

This angel of "unclear entitlement" does not possess spikes. Nor does it wear birds or bird poop.

We can only assume therefore that Her Majesty the Queen has appointed herself a sniper to sit atop the palace roof and take out the little buggers before they even make landing. If you look to the left wing you'll see a set of stairs on the roof, leading to a raised platform. Perfect position to preserve the splendour of Queen Vicky.

This is perhaps not the most illustrious position to hold, but it would be a sure sight better than being one of the guards standing watch by the front doors, with nothing to do but stomp back and forth in an attempt not to have their fleet fall asleep.  I suspect that the Royal Sniper may have had some practice in the gardens, as there are multiple signs about the place requesting that one does not feed the pelicans. One would be quite willing to oblige however one does find that actually, there are are no pelicans. One must make do feeding the swans, geese, ducks and squirrels instead.