Most hostels offer female only dorm rooms for those of us who are for whatever reason uncomfortable sharing a room with the sausage-wielding sex. I've even seen a few places that offer male only dorms as well, as is only fair. Typically beds in such dorms cost a little extra, so I've been bunking in mixed dorms. Until now.

This room is very pink. 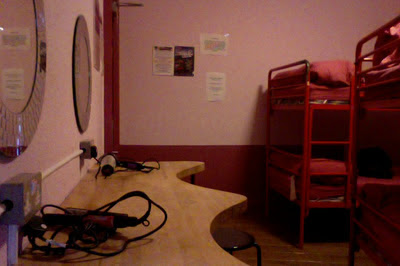 On seeing the wall fitted out with 3 mirrors, stools, dressing table as well having a hair dryer and hair straightener (!!!), my initial reaction was somewhat indignant. Who wants all that cliched crap?

Well, to be honest I was pretty damn excited to see the hair dryer. Wet hair in this climate is a little uncomfortable. It only works for two seconds on the highest setting before entering torpor, as I discovered.

This led me to consider the hair straightener, because dammit I wanted to go outside and I did not want wet hair at the same time. Now, I've never used a hair straightener in my life. Partly because my hair is pretty damn straight, but mostly because I'm lazy and don't believe in high maintenance hair. Pfffft.

The general theory behind hair straighteners I understood, but exactly how one uses them...uh, are they supposed to vibrate anxiously when you clap the tongs together? Because this one did. I gave my hair a few swipes before being far too disconcerted by the trembling appliance and thus ended my first and probably only experiment with hair straighteners.

It was a full house last night, and in the morning I was woken by the others springiness out of bed to stand in front of the mirrors and do...things. I have no idea what any of them were doing but there was a lot of it. The hair straightener was used. The hair dryer was used (on a lower setting). There were all sorts of tubes and powders and touching of hair. All this before they were even out of their jammies.

Me, I rolled out of bed, changed into be-seen-in-public clothes, and staggered downstairs for breakfast without even putting deodorant on.

I don't think I'm very good at being a woman.

Still, there is some merit to gender stereotyping. For example, "girls snore far less than boys" IS THE TRUTH, THE WHOLE TRUTH, AND NOTHING BUT THE TRUTH.
Posted by Tessa at 6:58 pm