This Is Not Patience

Breakfast has never been a regular feature in my diet. Unless it's special, like eggs benedict or pancakes, it doesn't exist. Recently I've been forced to add it to my day. I dislike the weight it has added to my hips and belly. I don't need any more cushioning, but my stomach does.

Most mornings I take a painkiller before I've finished getting dressed.

He said: "So, what qualities do you bring to the position?"

She said: "This is your opportunity to tell us how great you are."

The above conversation based on a true story. "Based on" meaning "word for word".

It usually hits on the train into the city; a slab of nausea; an intense cold sweat that leaves me dehydrated in seconds; and that heavy distance between me and my body; all the harbingers that indicate I am about to collapse and/or puke.

So I suck at breakfast and I suck at dinner, but I take lunch very seriously. Usually because by that point I'm starving.

If it weren't for habitual thinking I would have used lunch to illustrate this post, but to be honest, it would have been equally tedious. I cook batches, freeze batches, and eat the same thing every day for weeks on end.

The last batch I cooked was soup that deviated from my normal vegie soup, so of course it was scrotum. I've been eating poo soup for months.

Last week I decided to experiment again and have a go at making dal makhani. Which would have worked fine if I had black lentils instead of black beans.

Oh well. Can't go too bad with all those spices. 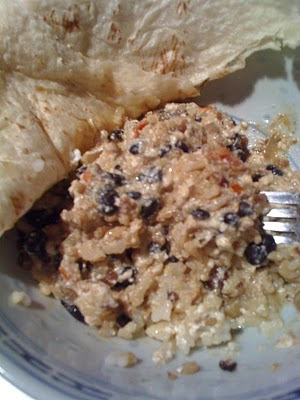 All last week, except Friday when I had peanut butter toast.

Tempus Can Go Fug Itself

I feel I should comment on the changing light, the newly opened sky, and the longer warmth in the days. They say that people who live with marked seasons feel the passage of time deeper than those close to, say, the equator. Any other time I would have rolled all over this unwrapped season, welcomed that passage of time. Not now. I have had to draw myself in close to these passing seconds. I cannot support the weight of my future, or the burden of my history, I've had to recoil and instead of smearing myself across time I am a small concentration of awareness. Here. Now.

The trials of living a lone are never so emphasised as when you are incapacitated.

They Won't Be Silent

I need a doctor's certificate. I can't burn through my sick leave so fast, or I'll be forced to start taking leave without pay, and I can't afford that.

The medical clinic doesn't bulk bill. The money left in my account is needed for a train ticket.

The Best of the Horrible

Best of ASIM vol 2: Horror available for download as a PDF, and featuring Bitter Elsie Mae, a story I wrote about a vengeful ship. It made Ellen Datlow's Honourable Mentions. Not bad, little story, not bad.

I take these pills and sometimes they work and I can do my job, and sometimes they don't and I lose sick leave and time, and who knows what they're doing to my kidneys, and they constipate me and make me put on weight, and ultimately, they make no difference.

I can't bear the future or my past, and I can't say the present is easy to carry either.

Is it self-pity if you can't-

I'm just lying here with a bucket for company, picking out these words a letter at a time.
Posted by Tessa at 11:05 pm