I saw Karen Healey doing it, and it made me hungry. For the hell of it, I decided to copy her, and photograph my dinners in the last week. There was the vague hope there that it might prompt me to cook.

At the time, I said it would probably amount to five photographs of peanut butter toast.

Gosh but I do have high expectations of myself. 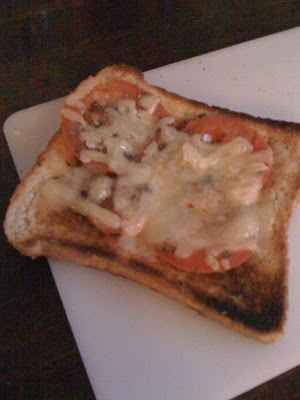 A promising start! There was actually tomato in the fridge, and so I treated myself to toasted cheese and tomato, with oregano, basil, salt and pepper. Sounds awesome? Is awesome.

Except I wasn't in the mood to wait for the grill to melt the cheese, so I put it in the microwave.

Which melted the cheese alright.

And made the tomatoes somewhat nuclear.

The whole roof of my mouth was burned and is, a week later, still rotting.

Tuesday was a day in which every step I took resulted in the discovery of quicksand, or fire ants, or broken glass, or horseshit.

Tuesday I went home and ate vodka for dinner. 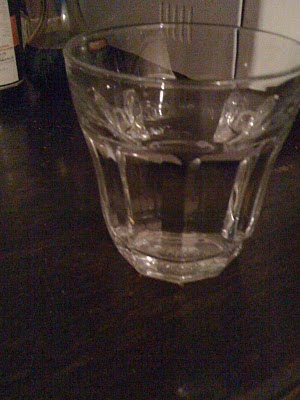 Except while my head was certainly in the mood for vodka, my body wasn't. I poured that glass, looked at it, and then walked away.

Wednesday is not an individual, and since Wednesday saw Tuesday being needlessly callous to me, Wednesday followed suit.

I went home knowing that there was already a pre-poured glass of vodka sitting on the bench and my only goal for the rest of the day was to drink it.

Instead I made a cup of tea. 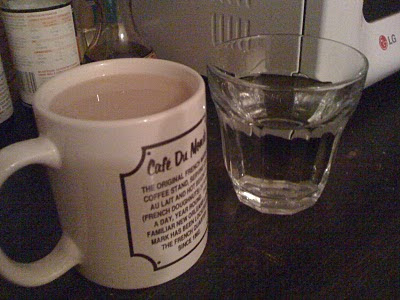 Thursday night is for swing dancing. There was no dinner.

Friday I ate someone else's dinner. It was actually the only real meal I ate all week, and it was very delicious, and I completely failed to take a photo of it.

The glass of vodka was still sitting on the bench come Saturday morning. Purely because it amused me, this failure to make it go away, and because continuing to document its existence seemed appropriate, I took another photo. 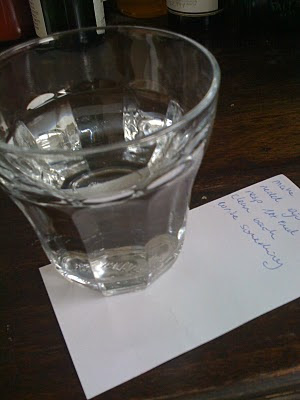 Then I looked at my To Do List. Every time I write a To Do List, "write" is at the bottom. After cleaning the toilet.

Every time I realise where I've put it in my priorities, I shake a little.

On Saturday I had vodka for breakfast.
Posted by Tessa at 6:56 am