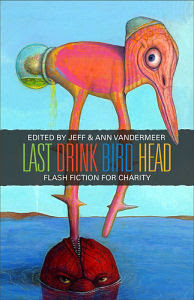 The insane kids at over at VanderMeer Industries have put together an anthology of flash fiction, with all proceeds going to charity. Contributor list as follows:

It's been so long I couldn't remember what I'd written. Proofing the story was pretty much a fresh reading. It contains ninja. Which, you know, didn't really surprise me.

I'm tempted to point out names in that list, and have a sad little tizzy about sharing a ToC with them, but there are just! too! many! I skimmed the other stories. It is indeed a strange and wonderful collection. (DUDE. HOLY CRAP. I HAVE TOTALLY SNUCK ON TO THE GROWN UP'S TABLE. BOOYAH.)

It will be launched at the World Fantasy Convention this Halloween.

The Best American Fantasy series has undergone a series of important changes, starting with the publisher. Underland Press has acquired the Best American Fantasy series, and will publish the third volume, “Real Unreal,” in January of 2010. BAF4, tentatively titled “Imaginary Borders,” will appear in March 2011. BAF3 contains work by, among others, Stephen King, Lisa Goldstein, Peter S. Beagle, and John Kessel, as chosen by guest editor Kevin Brockmeier with assistance from series editor Matthew Cheney. The full table of contents is reproduced below. The cover of BAF3 was designed by John Coulthart.

The guest editors for volumes 4 through 6 will be: Minister Faust, Junot Diaz, and Catherynne M. Valente. Each of these critically acclaimed writers will bring excellence and expertise to the position. BAF4 will include work published in 2010, as the series skips a year to accommodate the time needed for the change in publisher and general reorganization.

“Victoria Blake at Underland has worked hard to create the perfect home for this unique series,” BAF co-founder Jeff VanderMeer said, “and the guest editors we’ve put in place reflect an exciting diversity of opinions about and approaches to fiction. Each will bring their own spin to the volume they edit, and that’s going to be great in terms of keeping the series vital and relevant.”

A series of staffing changes have also occurred. Matthew Cheney, who has done wonderful work on the first three volumes, will be stepping down as series editor due to other demands on his time. Co-founders Ann and Jeff VanderMeer will perform the role of series editor going forward, while Cheney remains in an advisory position. Former first readers Clayton Kroh and Tessa Kum will serve as assistant editors for BAF beginning with volume 4. Fábio Fernandes and Larry Nolen have been added in an editorial capacity, especially as regards the Latin American publishing community. Further staff additions will occur over the next year as necessary.

Guidelines for BAF4 will be made available by January of 2010. Any publications sent to Matthew Cheney will be forwarded to the VanderMeers. Publications should not be sent to the guest editors at this time. Please address queries to bestamericanfantasy at gmail.com or POB 4248, Tallahassee, FL 32315. The BAF website will be updated with all of this information shortly. Bookmark the BAF site and BAF blog for future updates.

“The Pentecostal Home for Flying Children” by Will Clarke (The Oxford American, Issue 61)

“For a Ruthless Criticism of Everything Existing” by Martin Cozza (Pindeldyboz, July 6 2008)

“The Torturer’s Wife” by Thomas Glave (The Kenyon Review, Fall 2008)

“Couple of Lovers on a Red Background” by Rebecca Makkai (Brilliant Corners, Summer 2008)

“Flying and Falling” by Kuzhali Manickavel (Shimmer, The Art Issue 2008)

“The King of the Djinn” by David Ackert & Benjamin Rosenbaum (Realms of Fantasy, February 2008)

“The City and the Moon” by Deborah Schwartz (The Kenyon Review, Spring 2008)

The editors would like to call special attention to the following stories published in 2008:

“The Lagerstatte” by Laird Barron
The Del Rey Book of Science Fiction and Fantasy, edited by Ellen Datlow

“Within the City of the Swan” by Aliette de Bodard
Shimmer, The Art Issue 2008

“The Loa and the Gaping Jaw” by Brendan Byrne
Flurb, a Webzine of Astonishing Tales, Fall-Winter 2008

“All the Little Gods We Are” by John Grant
Clockwork Phoenix: Tales of Beauty and Strangeness, edited by Mike Allen

“The Difficulties of Evolution” by Karen Heuler
Weird Tales, July/Aug 2008

“On the Banks of the River of Heaven” by Richard Parks
Realms of Fantasy, April 2008

“Detours on the Way to Nothing” by Rachel Swirsky
Weird Tales, March/April 2008

sometimes even the right is wrong

I had intended to blog more after passing that enormous deadline (and by 'passing' I mean exactly like kidney stones), but the story came back. A couple of times. And the Baggage story was waiting for final edits too. And I have to write story notes to go with it. And I have the damn lurgy.

That's a blanket Do Not Want. I don't want to write emails, book reviews, blog posts, comments, To Do Lists. My output is not infinite, and right now, my brain is standing in front of a fridge containing a dried up piece of ginger and some moldy hummus and saying, "Dude, seriously, you need to go stock up."

Once the Baggage story and Kidney Stone story are laid to rest, I'll have a lot more time and headspace, and I intend to do a whole lot of not much with either. In the last week Doubt and Paranoia, my dear long-time friends, have come back to visit, which means I've passed the point of being merely tired and under pressure, and have now run out of mental defences against the world at large. I'm not cool with that. Not at all. Gotta shore up the fortress walls. Gotta stake out some territory. Gotta find some silence.

Poor neglected blog. You got food comin' too ya. I still have most of a year of book write ups to do, MIFF and a couple of gig reports, and the rest of my Japan trip to put up. Just. You know. Later.

Hope you strange funny people are staying warm out there in Internetland. 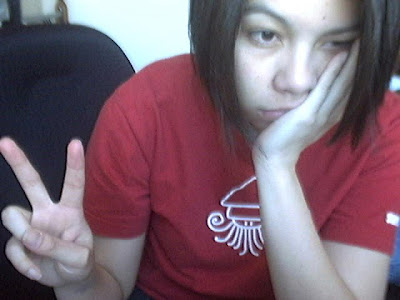