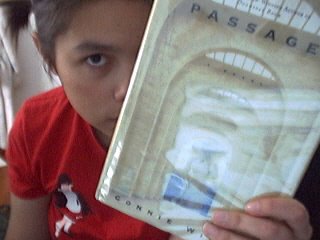 Willis is one of those authors I've been meaning to read for a long time, but never quite got there. After hearing her read an except of her current project at worldcon, I went and grabbed the first copy of this I found in the dealer's room. What a mind! What amusement! What amazing dialogue!

I started reading it while standing in line for her signing. Very nearly ignored the author in favour of her own book.

Joanna Lander and Richard Wright work at the Mercy General Hospital, researching the phenomenon of near-death experiences (NDEs). Their investigation is geared towards what an NDE actually is, in terms of the human body's functions, and thus they spend a significant amount of time reproducing the brain-state in others. Mandrake, another working in the field, looks after all the angels and golden light and departed dear ones.

Their research isn't going well, however, and Joanna finds herself volunteering to go under and experience and NDE for herself, with strange and not altogether pleasant consequences.

Although the majority of the book consists of Joanna powering from one part of the hospital to another, asking questions and not quite getting answers, this book turned out to be one of those dangerously addictive books. I kept sneaking it out to read at work, every couple of minutes I'd grab it and dip in for just a little more. It was such a different idea, NDEs, and something I knew nothing about. The characters were incredibly engaging and with such depth, especially Maisey. At once a remarkable simple and gob-smackingly complex book.

Despite the intensely distracting story, I couldn't help but spend time pondering Willis's writing technique. This book is, for the most part, talking heads. Nothing but talking heads tossing theories at each other, questions, answers, pushing the story and reader onward, always onward, with nothing but a couple of people standing around arranging and organising and discussing. With all the criting and editing I've done and had done, and all the workshops I've attended, it's been standard to be warned away from talking head stories. Why, I wonder? Perhaps they're easy to to badly. Willis makes them look easy and intriguing and fascinating.

Another interesting aspect was the utter dread and fear she managed to inspire in me. Having not read much on horror, I'm not sure what it is the horror genre tries to provoke in a reader - fear, horror, or a romp with the gruesome and ghastly that has little to do with either. This book scared me something fierce until I figured out what was going on, by careful application of fear. Fear is contagious. If a character is afraid, truly afraid, the reader can and will pick up on that. Lovecraft uses the same technique, only he uses it like a sledgehammer; "YOU ARE AFRAID AND AGHAST AND HORRIFIED." Willis is far more insidious.

I found the ending satisfying, although I've yet to conclude on exactly what it is that Willis is trying to say. I drew my own conclusions, and that appears to be enough.

Verdict: The general consensus is that Connie Willis is a brilliant writer, and everyone should read her. I agree.
Posted by Tessa at 4:49 am