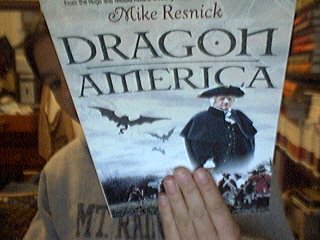 Spoilers. But not really.

I bought this at Worldcon. I have the vague feeling I'd heard of it sometime before, because when I saw it I had an 'oh yeah,' moment. Alternative history with red coats and dragons, why don't mind if I do.

I came at it with some high expectations; Resnick seemed to be all over worldcon. Everywhere. Mile long queues for his signings. Too many Hugo nominations. He was a happening man.

The story is set during the War of Independence, witn Washington sending Daniel Boone of into the wild west to find some way of winning the war, be it by recruiting natives or taming dragons. Boone decides to tame dragons.

And that's what he does.

And Washington holds the English off just long enough.

And the day is saved.

And that really is it.

The writing was simple to the point of being boring, although the banter between characters was fun. And...that really is it.

It probably didn't go in the book's favour that I started reading it at LAX, terminally exhausted and with 20 hours of flight looming over me. That said, the fact that it didn't distract me from my circumstances says something as well.

Still, I wish I hadn't ripped the cover. That's how tired I was. Careless with my books. And too tired to care as well.

Verdict: This is a nice light bit of fluff, but there is better fluff to be had.
Posted by Tessa at 1:05 pm