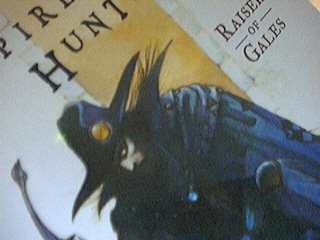 HE CAN SEE YOU.

Look, this book sucks. It's badly written, and not particularly well translated, and I totally utterly love it. Some shit is so bad it's brilliant. I know it isn't good for me, just like chocolate, but do you think I can stop?

In this book, strange things are happening in the frontier village of Tepes. Ten years ago, children vanished up by a ruined castle, and returned a week later with no memory of where they had been or what had happened to them. Now, vampires plague the village (which is to be expected when reading a book about a vampire hunter), only these vampires can move about in daylight.

I have no idea why it's called 'Raiser of Gales'. As much as that is a great title, it has bugger all to do with anything. It rains a bit, but not because anyone made it rain.

D wanders in, and takes the job. There's a pretty girl involved who (to me) is a right irritating brat, but never the less has this astonishing power to, OMG!, make D at loss for words. 'cause she's pretty. And terrible intelligent. And pretty. She (as with all female leads in these books) is in constant peril of being raped (because all males apart from D are rapists at heart), and is regularly taken advantage of by her foster father. I'm not sure whether or not this is rape, because apparently despite hating it, she can't help but be terrible aroused. I call BULLSHIT. This relationship also does not fuck her up, which I find hard to believe. Her greatest act of rebellion, when being confronted by all these sexual predators, is to stick out her tongue, which must mean something quite different in this world, as it is often more than enough to drive the person having the tongue stuck out at into a VIOLENT RAGE OF INDIGNATION. Seriously. Racial slurs don't have the same affect.

This girl, Lina, is one of those children who went missing, and is of course the key to everything.

Beyond that...this is one hell of a muddled story. It shambles around like a sad lost little zombie, not entirely sure of where it's going but finding some monsters to fight along the way anyway. I believe the end message is that these failed experimental vampires that walk in day were supposed to be a way of saying that even the Nobility knew they were dying out, and were trying to further themselves, but to create a new perfect race of human-vampire hybrids with all the strengths of both and none of the weaknesses, to make everyone happy, because vampires are essentially nice people.

It's never really clear who was responsible for what. There are too many mysterious shadows that whisper little secrets but never reveal their identity, so I'm not sure who's what.

Everyone takes the hue of paraffin again, which instead of making me think 'pale', makes me think 'lamp', which isn't a great look. D is gorgeous this, gorgeous that, so pretty that all these red-blooded hetrosexual rapist men want to get in his pants too. In fact, at one point, a band of brigands are frozen at the sight of this "gorgeous God of Death", which had me in tears.

Thankfully, everyone dies. Except D. Because, you know, he's too cool to die.

I will say this; the illustrations are beautiful. Yoshitaka Amano is a striking artist, and his pictures are eye catching, not in the standard anime way. He'll be at Worldcon in Japan, which may or may not have been a deciding factor on my attending.

Verdict: THE SHIT IS BANANAS. AND BANANAS ARE DAAAAAMN GOOD.
Posted by Tessa at 4:07 am