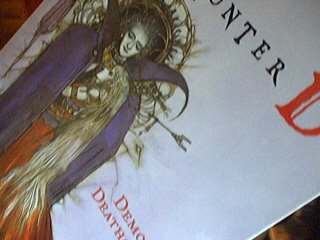 Don't worry, that's not D on the cover; he's too cool to wear something like that.

You probably know the drill by now; wobbly writing + wobbly translation = awesomeness. There is a special genius to these books. They have 'it', that infectious creative flare that blinds me to all the other flaws. Some of the time. That flare can't be faked, you either have it, or you don't.

This particular volume was the basis of the movie Bloodlust, where I first met D. (I thought he had no personality then too.) It was interesting noting the differences between the two, and there were a lot.

For example, in the book Leila, current female lead, is much the same as every other female lead so far. She's beeeeautiful, she's turrrf, she's full of sass and attituded and she don't take no crap from nobody, except D, because she can't help but fall madly in love with him at first sight. She's also in continual danger of sexual horrors, except this time, such threat doesn't come from whatever monsters they may be facing, but from her brothers.

I kinda choked when this came out.

The Marcus clan consists of four brothers and Leila. One night, they all decided to rape her. I have no idea why. I don't know many brothers who find the idea of boning their sisters appealing, so to find four such people in the one family is a bit high. Nevertheless, they do this. Instead of, I don't know, LEAVING THEM, she stays, and they go around hunting vampires with a happy family dynamic that is not the least bit messed up, and she can't have been that scarred from the ordeal.

So, yes. Insert a fair amount of disbelief and disgust. This guy does NOT know how to write women, and I worry for those in his life.

In the movie, all that has been taken out, and Leila is a more solid and structured character. Who hides her love well.

I actually found this very hard to get past. The rest of the book receeds behind that ridiculous bit of characterisation, if that's what it was.

The heart of the story is a vampire and a human woman have fallen in love, and are making an escape to a fabled starport, where they hope to find a ship still functioning, and make for the stars. D and the Marcus clan are hunting them due to a comission from the girl's father, although they're not exactly for working together. Thrown into this mix are a few demons of Barborois, who are all for killing everyone, and there you have the essence of the story: everyone fights everyone else.

This felt like the weakest of the three I've read, even taking into consideration that the last one was full of fog that I never saw through. Here, it was all just one excuse for a supposedly jaw-dropping fight after another, over and over. By now, I'm well aware of exactly how cool D is, and I really don't need it demonstrated this often. At least in the last there was something of an interesting dynamic between characters.

I did prefer the ending in the book over the movie. Much sadder, with much less hope, but it felt right.

And to finish on a random tangent, at some point one of the Marcus brothers and Mayerling, the vampire, have a show down in an ant nest. These ants (at least, I thought of them as ants) were especially savage flesh eaters, who would strip your bones before you knew it. But they were called 'mints'. I couldn't help seeing the two of them covered by minties and screaming.

Verdict: One day, he'll have a female lead that isn't a mere device for getting his joneses on.
Posted by Tessa at 4:51 am