We had a Ginkgo biloba plant when I was a child. It sat in a pot on the front verandah by the door, where it was mostly neglected. It always fascinated me. A book on dinosaurs had told me that this was a relic of prehistoric times, that this plant was kicking around millions of millions of years ago with dinosaurs (everything is a dinosaur when you're a kid). It was a living fossil.

This confused me to no end. I'd stare at this small plant which was shorter than I was and wonder how could it possibly be that old. Especially since it was dead, I mean, they'd found it in the fossil record. Maybe this was a cutting from some ancient behemoth ginkgo, but then, where was this monster dinosaur tree? How did such an incredible time-travelling plant end up on our front verandah? What if we killed it? Oh gods, what if we killed the living fossil? Took me rather a long time to realise that 'living fossil' simply meant it had not evolved from that form in the intervening millennia. Even the smartest of kids have - often peculiar - intellectual blindspots.

We did end up kill the living fossil. Poor plant.

Because of this misunderstanding I've always viewed the ginkgo with awe, and it is a plant that lends itself to awe with ease. Those leaves are so simple and elegant, reminiscent of nothing in the neighbouring yards or the school playgrounds. Their lack of complexity in form and placement evoke an era of evolution that is only visible to us in fossils. The hint of what is to come, what surrounds us now, in their texture.

As an adult, I appreciate the living fossil for what I perceive to be its stubborn indifference to the passage of time and the incredible changes wrought in the world around it. The supercontinent of Pangea no longer exists, but this plant does, unchanged. While its surrounding peers figured out how to do flowers - flowers! such complex, deceitful structures! - and changed their leaves and skin to suit the environment, the ginkgo just sat back and said, "Nah, I'm good." Admittedly, it's likely that the ginkgo is extinct in the wild and has survived these past centuries only due to the practice of planting them at temples and shrines, shared by many cultures around Asia. 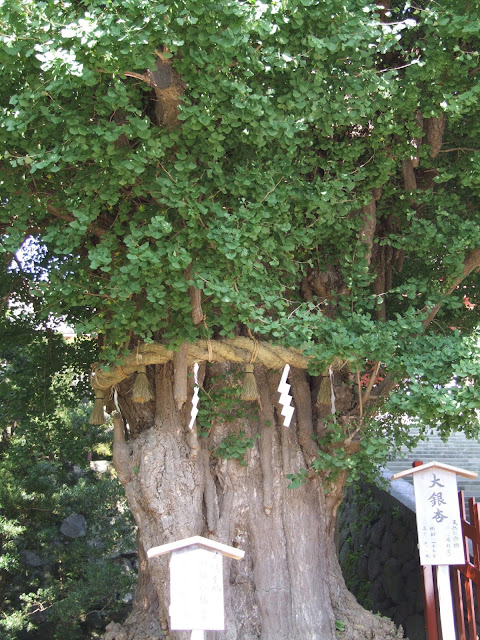 This ginkgo tree is planted at the Tsurugaokuhachimangu in Kamakura, Japan. I visited in 2007, and did indeed get to see a ancient behemoth ginkgo. From the wiki:

The ginkgo that had stood next to Tsurugaoka Hachimangū's stairway almost from its foundation and which appears in almost every old print of the shrine was completely uprooted and greatly damaged at 4:40 in the morning on March 10, 2010. According to an expert who analyzed the tree, the fall is likely due to rot. Both the tree's stump and a section of its trunk replanted nearby have produced leaves.
The tree was nicknamed kakure-ichō (隠れ銀杏 hiding ginkgo?) because according to an Edo period urban legend, a now-famous assassin hid behind it before striking his victim.


...Oh. I wasn't aware the old fella had toppled. I'm glad its bits are thriving. It's around one thousand years old, which is breath-stopping to consider. Very glad I was able to see it whole and proud.

The assassination in question:

Under heavy snow on the evening of February 12, 1219 (Jōkyū 1, 26th day of the 1st month), shogun Minamoto no Sanetomo was coming down from Tsurugaoka Hachimangū's Senior Shrine after assisting to a ceremony celebrating his nomination to Udaijin. His nephew Kugyō, son of second shogun Minamoto no Yoriie, came out from next to the stone stairway of the shrine, then suddenly attacked and assassinated him in the hope to become shogun himself. The killer is often described as hiding behind the giant ginkgo, but no contemporary text mentions the tree, and this detail is likely an Edo era invention first appeared in Tokugawa Mitsukuni's Shinpen Kamakurashi. For his act Kugyō was himself beheaded a few hours later, thus bringing the Seiwa Genji line of the Minamoto clan and their rule in Kamakura to a sudden end. 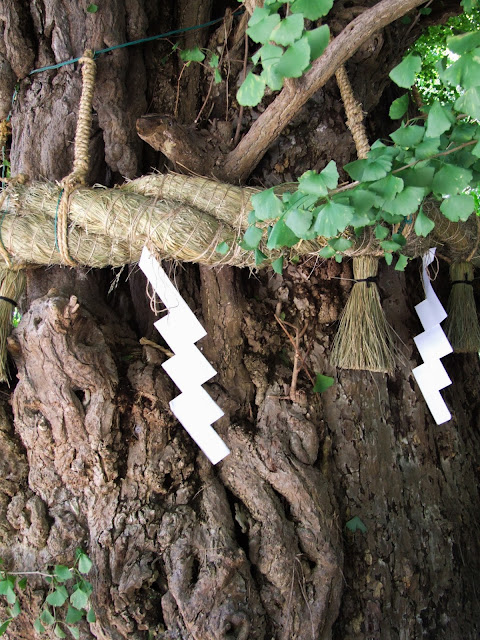 One thousand years is a long time, but when considering a time line of 270 million years, a handful of centuries is nothing.

(When anthropomorphising Evolution as some sort of deity artisan, for which their every project is a work in project, forever being tinkered with, it's easy to imagine the ginkgo as a work that has sat forgotten on a shelf somewhere for the aeons of the planet's life, gathering dust but still perfectly functional, while Evolution considers the merits of iridescence in plant cells.)

When I spied this wee plant at the Growing Friends' Nursery Sale at the Botanical and Rare Plant Fair, I forgot all the other lovely plants I'd been eyeing off, picked it up, hugged it, and brought it home. A dinosaur plant of my very own! With such fine, healthy leaves, and that rich youthful colour! 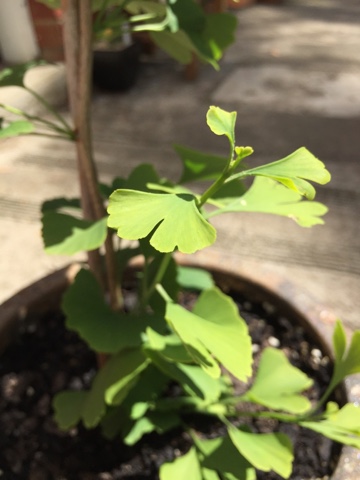 I was told I shouldn't be buying trees, stop buying trees, Tessa we do not have any room for trees, but it was mine now. Mine mine mine.

It has proved to be endlessly entertaining. Fast growing in the current heat, it gobbles up our ridiculously strong sun. Whereas eucalypts appear to have evolved leaves to mitigate the ferocity of the Australian sun (being largely scythe-shaped and hanging long and vertical, so that the high sun mostly hits their edges, and it is the morning and late afternoon sun which they make the most of), the ginkgo holds out its leaves like hands waiting for more. The birds leave it alone. The pests leave it alone. A small spider has made a home in a curl in the lower canopy.

All the care guides I read indicated that the ginkgo does not take well to transplanting, and does not at all like having its roots disturbed. Moving it into its current pot was anxiety-inducing. I tried my best to remove the entire plug from its original bucket and not shift the roots at all, but that didn't happen. The soil slipped and everything fell apart in my hands, the roots wrenched about and naked and pretty much exactly what I was trying to avoid. Potted it up best I could, and for the next couple of weeks watched it like the natural worry-wort I am.

I'm not sure what the fuss was about. This plant had exactly zero reaction to being repotted. Possibly its fussiness about its feet was overstated.

It's quite a communicative plant. It gets very, very sad when the soil is dry. It wilts. Not like most other plants, whereby wilting means a drooping of the leaves and stems. No, the ginkgo folds over entirely, like a toddler putting on a show, like a melodramatic pout, like there is no point in going on, I give up, go on without me. Once the soil is wet again, it straightens up within an hour, as if nothing was ever wrong. The leaves don't dry out or crisp up, no colour change, nothing. Just pure drama.

Dad went hunting for some vegetable or fruit he remembers being in the family congee when he was a kid. Asking at a store led him to a vacuum sealed parcel of creamy white orbs, which turned out to be ginkgo nuts. They went into his latest batch of congee. They're similar to fungi and mushrooms in that they have that crisp and firm snap and resistance when being bitten into, but then a smooth buttery texture that follows. It isn't until bitten that they release any flavour, which is distinctly sour. This sourness isn't quite strong enough to be unpleasant, but is none-the-less sour which I associate with being unpleasant, so on the whole, the flavour is quite confusing.

It makes sense. I'm guessing these nuts developed before the creatures that ate them developed had developed a sophisticated palate which needed to be bribed with delicious flavours, if the tree was even using animals as distribution. Now the ginkgo is all, This is the way I've been cooking my nuts for longer than your species's grandspecies existed. Ain't got time for your tastebuds. Be grateful for the protein and begone.

No one knew if my ginkgo was male or female, so I'll just have to wait and see if we get a home-grown source of ginkgo nuts.

It is a species that has survived asteroid-impacts, extinction-level events, the end of so many worlds. When I look at young trees I see giants. Already a living fossil, in this scrawny trunk is a future ancient. One day, perhaps my ginkgo will be a behemoth. It has that potential. I will never see it, but it is a dream both the ginkgo and I share. 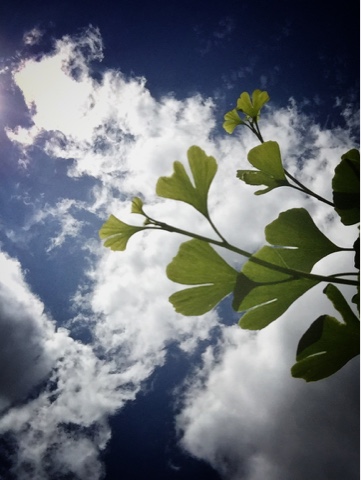