Mild spoilers? Who doesn't know this story in essence?

There was something of a validation that the copy I read was printed before 1984. 1979, to be exact. There was a (very old) 'collins book depot' bookmark - calendar still slotted in the cover. 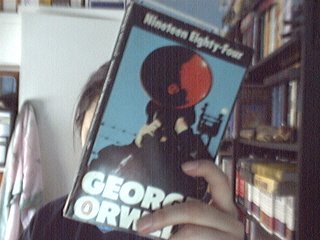 My initial motivation for picking up this book was, again, because it was small. Light. Oh so very light. Oh, I wanted to read it, but the driving force wasn't the best. I popped it open whilst waiting for a train. Good solid writing, easy to read, and I was enjoying myself until I came to the first reference to Big Brother.

Such is the conditioning of society, my reaction was "Pah. They're ripping off sci-fi classcis and destroy- oh. Shit." At that point, I remembered I was holding the actual original in my hands, and promptly got very embarassed in my head.

I admit, I've been procrastinating writing about this book. It has been studied and analysed for so long, by people with far high academic credentials than me, that I'm sure anything I have to say will have been said before, or be complete and utter crap. But that hasn't stopped me in the past, and I recommend books I like.

I loved this book, because it got me so worked up I stormed about the house making all sorts of outraged exclaimations at the state of the world Orwell proposes. The concept of Newspeak in particular horrified me, in a deep-in-the-bone way. Not only that Newspeak seeks to take away the ability to even think dissident thoughts in the comfort and privacy of one's own head, but that Newspeak seeks to abolish layers of meaning. That Newspeak seeks to destroy words. That's the writer in me screaming bloody murder.

Languages are messy things because humans are messy things. We're not the neat, concise and clear cut beings we wish we were, and unless we turn into the entirely emotionless automations of futuristic cliches, we never will be. To take away a means of expressing that mess seems to be setting the entire human race up for one massive implosion.

Perhaps Newspeak disturbed me so deeply because of all the methods of maintaining a dictatorship, it seemed the most effective and brilliant way.

Unfortunately, there was one very large point in the story's politiics that I didn't buy. O'Brien, the incredibly obvious two-faced working-for-the-party traitor, goes into a lengthy explainations of why the Party has created the world it has, and why this system must be maintained. Unfortunately I can't find the quote I was looking for, having spent the last ten minutes flipping through the pages, but a basic paraphrase of what I understood the Party's goal to be was a world without happiness, joy, pleasure. A world built on fear, hatred, mistrust, and those other mean and lonely things. They were actively working towards that world.

Now, if O'Brien had been talking about working to a better world, I might have swallowed it. Hitler, even on his worst days, believed he was making a better world. He didn't think of himself as the root of all evil. That is my problem; I don't believe that people can actively work to make the world miserable. For everyone. For ever. Misery might be a means to an end, but never the end itself.

But I'm young, and dumb. I can take this comfortable life I have for granted, and tell myself that I would have never given in. (That small truthful and stomped on part of me says that I wouldn't have given in, because I wouldn't have had the courage to speak out in the first place.)

But now, I must share a terrible truth with you. The following is taken from the first page of the book, and describes a poster of Big Brother himself;

It depicted simply an enormous face, more than a metre wide: the face of a man of about forty-five, with a heavy black moustache and ruggedly handsome features. 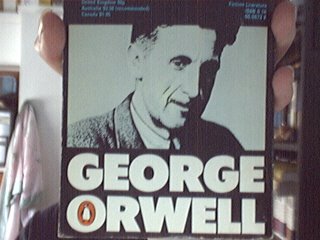 THERE IS NO HOPE FOR THE WORLD! DOOM! DOOM! DOOOOOOOOM!

Verdict: Books like this become classics because they are -that- good. They deserve the acclaim, and they really have the staying power. This will make you think, if only because it hightlights the fact that you can take for granted your ability to think.

PS: Orwell uses the word 'oftener'. Newspeak stomps on that word.
Posted by Tessa at 3:07 am