Baggage; Many Copies of

The launch of Baggage was stupefying. 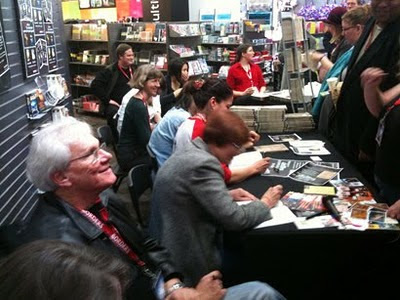 photo filched from alan baxter
It was so stupefying that I'm not actually going to write about it, I'm just going to filch from Gillian's blog:

The Baggage launch was lovely, though Mr Dann and I got up to a great deal of mischief during the signings. I hadn't actually thought I would need to give a speech at the launch. Honestly. I helped make sandwiches, and people who make sandwiches don't give speeches. Which is crazy thinking, since I've always maintained that the people who make sandwiches should *always* give speeches, especially if they're the editor of the book being launched. The key role of second sandwich assistant is not the whole of my life, after all.

And all those wonderful writers sat there and smiled - they know me too well. And there were a large number of equally wonderful writers in attendance. The writing community is just warm and generous and entirely made of awesome. And Sharyn Lilley is all that and with bells on. Baggage is off to a fine start in the world. Also, three different people who had head starts on the book told me that they can't see Federation Square without Tessa's story overshadowing it.

There was something of a signature production line with the attending contributors, and while I had myself a fine time being in reach of the sammiches and playing up with Madames Deb Biancotti and Maxine McArthur, I lost count of how many copies I scribbled in. A few people (possibly the same people) at the launch and even during the con in the days following were generous enough to tell me they'd read my story and-

You know, no one says they enjoyed it, or that they liked it. It isn't that sort of story.

I suppose I should come clean with myself and finally admit that, yeah, this story means something to me too. 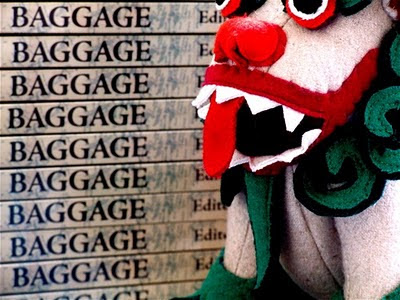 I took my contributor payment in books, not money. It's all part of my cunning plan to get this book read.

Melbournians wishing to get their hands on a copy, may I direct you to Borders on South Wharf? I wandered back in a couple of days back, and Baggage has prime position on a shelf end. The staff there were brilliant during the launch, and their support should be supported in turn.

Australians wishing to get their hands on a copy, I shall direct you to the publisher's site, where you may order online. (Gillian's latest novel is also up for grabs there. Nudgehintnudge.)

And for those of you overseas?

I've made queries with Sharyn, the publisher, and if you wish to purchase from her please shoot her an email. She's more than happy to work out shipping for you, no matter where you are.

There is this massive pile of Baggage sitting on my desk.

They need to get OFF my desk and OUT into the world and be READ.

Of Baggage people have said:

"Baggage is a fascinating exploration of Australian issues through characters and situations that feel immediate and real. There's little in the way of escapism here, but instead much subtlety and nuance, combined with stunning writing. From the incendiary, no-holds-barred 'Acception' by Tessa Kum to the quiet power of K.J. Bishop's 'Vision Splendid', and beyond, this anthology tackles difficult and diverse subject matter." Jeff VanderMeer, World Fantasy award winner

"Baggage collects many of the finest voices in Australian speculative fiction. Each author contributes a unique cultural perspective, with stories ranging from the deeply personal to the highly disturbing. Baggage an anthology not to be missed." Shane Jiraya Cummings, OzHorrorScope

"This is a well-rounded anthology, entertaining and thought-provoking in one. The stories were all easy to read, even the ones that made my teeth hurt (Tessa Kum and Janeen Webb’s stories did that for me, but in a good, thought-provoking way)." Joanne Kasper, ASIF

Of Acception people have said:

"I think reading your story first was like having hot chilli before going to a wine tasting. Kinda rendered the literary tastebuds useless for anything else for a while." Ian McHugh

"There's an awful lot of you in there, isn't there? And "Colin"! "Colin" isn't a name to give a character!" Mum