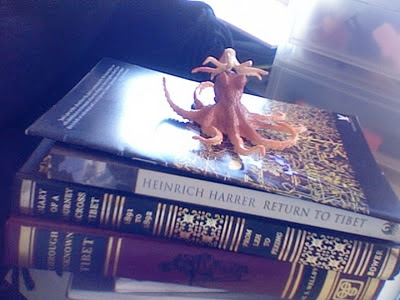 In my defence, I have critiqued a couple of novels and watched The Naked Lunch I don't know how many times.

Having read Seven Years in Tibet just prior to traveling there, it seemed only fitting that the first book I pick up on my return be the sequel, of a sort. I bought it in a book store lining the kora of the boudhanath in Little Tibet in Kathmandu.

In this book Harrer writes of what he found when he finally returned to Tibet, some thirty years after he fled the country ahead of the invasion by Red China. I was a little apprehensive, to be honest. The nature of his departure, the knowledge of what had come to pass in those years, the treacherous ground nostalgia presents; it all seemed the perfect equation for a bitter book.

The Tibet he visited was much similar to the one I visited. The talk of what had gone on was horrific and devastating and so very quiet. The manner in which he was minded day and night differs somewhat, as I was allowed to roam around as I pleased, but then, I was only a tourist.

What surprised me was the hope he displayed that things would improve. He wrote of improving relations with China, that the administration was perhaps coming to terms with the fact that their handling of Tibet was simply not working, not for the Tibetans or for them, and that what had passed with the Four wasn't a legacy they necessarily wished to continue, and that maybe the Dalai Lama would be allowed to return, may Tibetans would be allowed to be Tibetans without fear, maybe, maybe...

His voice is laced with hurt at all that had come to pass, all the damage that would never be able to be undone, yet the hope is equal to that hurt. He truly believed things would change for the better.

The Tibet he envisioned in his hope is not the Tibet I visited.

Purchased in Kathmandu after a blissfully quiet hour spent examining every book in a bookstore.

This is what it says it is, the expedition log of a trip across Tibet.

It is a little bit hilarious. By a little bit, I mean a lot. Bower is not a...he's...well. He's a fine colonial spirit, out to bring civility to the savages and barbarians of the world. Usually by yelling and bullying them into giving him food, ponies and guides. He is entirely at the mercy of the Tibetans he encounters, yet in this diary never once notes that his survival is entirely dependent upon their generosity, and wades into every encounter with a sense of entitlement that is equally impressive and appalling. He even made that classic near clichéd mistake of disputing river names, because his companions had said that river was called tsang-po, but then have also said this river is called tsang-po, and clearly they are not the same river! (Tsang-po being, of course, the Tibetan word for river.) The time his party spent crossing the Changtang was grueling for both expedition and reader - they did not see another soul, nor sign of another person, for some months. They were living hand to mouth, every day spent scrounging for water and anything to eat. There's a reason not even the wildlife loiters up there.

Mostly, he and his party seemed to survive because...well, it would be decided unbritish of them not to.

I actually picked this one up before Bower, but in the opening pages wherein Wellby lists the inventory for the expedition he makes reference to Bower's experience in crossing Tibet, so switched around.

The routes taken by both expeditions are quite similar, as far as I can tell without maps. Tibetan and Chinese town names Romanised purely from phonetic are nigh useless to identifying the actual locations they passed through.

The two men could not be more different. While Bower was offensive in the judgments he passed willy-nilly on everything for the various people and customs he met to the quality of the kyang (wild ass) they shot and ate to the ponies they requisitioned, Wellby greeted the world around him with a non-judgmental curiosity and even-handed analysis. While he encountered the same severe conditions on the chang (why, given he knew of Bower's experiences, did he still choose this route? Insanity!) and trouble with his entourage, the approaches he used to dealing with adversity were less roaring bull and more diplomatic guile. He took genuine delight in the discoveries made. I was particularly amused by the presence of Ruby, a fox terrier who accompanied them.

Still, this was something of an endurance read, as the Changtang was just as depressingly soul-crushingly monotonous. The quick history lesson of troubles in and around Xining was interesting - and still relevant - but once they were out of danger of starvation and dehydration, and back in the arms of civilisation, the diary itself lost interest, and was simply a catalogue of miles between one town and the next.

I love these books.

Short story as one-shot chapbook. Elegant little package for an elegantly restrained story. A sort of slow, gentle horror that caresses the insidious menace of nostalgia and true lost memories beneath the guise of a crime story. Very much enjoyed.
Posted by Tessa at 5:26 am